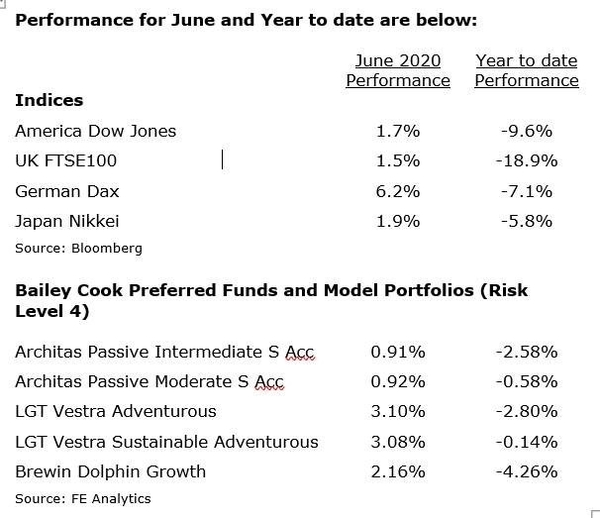 At this point we have no concerns over this news, and in fact we believe it is a positive step, but we will formally review the situation at our next Investment Steering Committee in three weeks. Liontrust have stated there will be no change to the investment strategy or the way in which the Architas funds are managed. A crucial consideration for us over the coming months as Architas is integrated into Liontrust, is that they continue to maintain stability and a sharp focus on managing the funds.

WHAT HAPPENED IN JUNE?

We review and analyse our researched funds on a monthly basis and, as already indicated, formally review them via the Investment Steering Committee quarterly meetings. It's not a like for like comparison to show the funds we select against indices but we are conscious that the media highlight the index returns and the objective of the funds we select is to be a diversified portfolio. We've seen a boost in European shares over June which may seem ironic given the collapse into insolvency of German Fintech giant Wirecard due to a multi-billion euro accounting fraud.

Every crisis seems to have its corporate collapse scandal: what was Polly Peck in the late 1980s, WorldCom and ENRON for the 2000-2003 recession appears to be Wirecard for the 2020 economic crisis. The exception was the 2008/2009 global financial crisis which went without a major corporate fraud scandal. The collapses of Bear Stearns, Lehman Brothers and Northern Rock appeared to incompetence rather than deliberate fraud.

Lockdowns have been lifted, bringing early signs of recovery. Retail sales have rebounded in many parts of the globe, with a jump of almost 18% in the US. In New Zealand credit card spending almost doubled. Yet the US Federal Reserve (Fed) still strikes a cautious note, suggesting interest rates will not rise until late 2022. Hardly an expectation of strong economic growth in the meantime. But echoing a familiar phrase, the Fed promised support for 'however long it takes'. And that's exactly what financial markets need to hear. The negative the increase in COVID-19 cases in the US and South America.

Four years on from the Brexit referendum and there is a new sense of urgency to the trade talks. But the same old stumbling blocks remain. Concessions over fishing rights in UK waters and protection for what the EU calls 'geographical indicators', such as champagne and feta cheese. The UK might be prepared to accept sanctions if it steps over EU red lines on the environment or state subsidies. A compromise certainly, but preferable to no deal. Meanwhile, Japan has given the UK a record-breaking deadline of six weeks to agree a trade deal.

We come back to today and the irony of the current situation. Although far more serious, it reminds us of our first six months and the frustration of not being able to see our clients, and we welcome doing so going forward, where they feel happy to see us again in their homes.