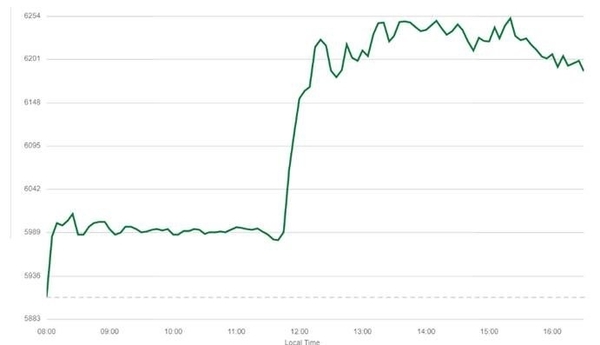 Stock markets were booming yesterday with the UK FTSE 100 index up over 4.6% on the day and United States (US) Dow Jones index closing up by 2.9%. Part of this is due to the news about Joe Biden as the next President, but more of this later. The chart (source: bbc.co.uk) showing the FTSE 100 movement throughout the day is remarkable.

The vaccine news, it feels we have all been waiting for, was announced late yesterday morning, as U.S pharmaceutical giant Pfizer and German biotech firm BioNTech said their coronavirus vaccine was more than 90% effective in preventing Covid-19 among those without evidence of prior infection. The expectancy was for the first vaccines to be between 60% and 70% effective so it is indeed fantastic news and we hope is the start of good vaccine news all round. In particular with our partisan hat on let us hope the Oxford Vaccine provides equally good news soon.

The vaccine news followed on from the markets opening up positively on the Joe Biden election win having been announced by the US media and indeed International leaders and even senior Republicans, such as ex-president George W Bush, have called to congratulate Joe Biden. The important aspect is that the Democrats haven't won the Senate. In American politics this is part of Congress who are responsible for passing laws and budgets. It is still to be confirmed and may not be until January but it is expected to be Republican. So a Democrat President and Republican Senate (and indeed vice versa) prevents any decisive measure being put in place, and can lead to grid lock. In the lead up to the election the two sides could not reach agreement on a government stimulus package and there may be some progress now the election is over. Indeed stock markets are happy that the expected Biden tax rises won't happen with a Republican Senate.

With no hard evidence so far of voter fraud, it seems the Trump legal challenges will not do much and so are being dismissed. It is good news that under Joe Biden we can expect the US to re-join the World Health Organisation and the Paris Accord on climate change.

Incumbent presidents usually get re-elected (only 11 out of 44 have tried and failed to do so). That's even more likely when a president is rated highly on the economy, as Trump was so the closeness probably shouldn't have been such a surprise. Had today's vaccine announcement been a couple of weeks ago would the result have been different!! One thing though we do expect is for him and his clan to be back!!

Let's also not forget China with their effective handling of Covid-19 have led the way in economic recovery, with an expected growth rate in 2020 of 5% to 6% and their domestic air travel back to 2019 levels. They can also be more decisive with a one party system. Are they therefore on track to overtake the US as the largest economy? - well maybe so with Covid-19 rampaging in the west. A successful vaccine overcoming the virus threat, means China's and Asia's decisive advantage during 2020 of being better able to live with the virus could quickly disappear again. If the vaccines disappoint, then significant behavioural changes will be required for the western world making the announcement today so welcome and important.

We turn to Brexit with the consensus is that a deal needs to be agreed over the next couple of weeks so it can be ratified before the end of the year. Meaningful negotiations will need to take place this week to make progress ahead of the expected mid-November practical deadline. The US Election result does change the geopolitical context for the Brexit talks. Not only has President Elect Biden been a critic of any actions that can be seen as damaging the Good Friday agreement, he is far keener on multilateral agreement than Donald Trump. Should the change in President herald a far closer relationship between Washington and Berlin, hopes of a comprehensive US trade deal with the UK will fade, making a deal between the UK and EU even more important economically.

Ironically one thing the US election did prove in the world of Covid 19 is that despite US voters naming it as their top issue in polls and despite them giving Trump bad marks for it, he doesn't seem to have lost as many votes over it as expected. In the UK, Boris Johnson is generally being regarded as having done a poor job on Covid 19. Voters seem to be cutting leaders a lot of slack on this problem even when they are critical of them. Boris's real test is to come - Will he manage a Brexit deal and more importantly how will they manage the vaccine roll out?

So as we edge closer to success, let's hope the progress continues and we can expect more good news in the weeks to come. 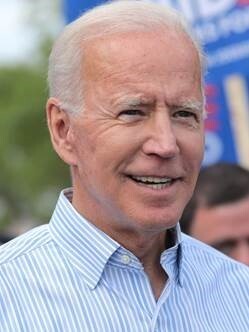